"It seems to me that to get out a book by committee can only result in disaster."

Charles Moore (1855-1942) was an American journalist, historian and city planner. He was the editor of the 1909 Plan of Chicago. He also wrote a biography on Burnham in 1921 entitled "Daniel H. Burnham, Architect, Planner of Cities.” Below, from Lake Forest College's Edward H. Bennett Collection, are two letters that he wrote to Bennett during the editing stage of the Plan of Chicago, which reveal his general frustration with the Chicago Plan Committee during the editing process. 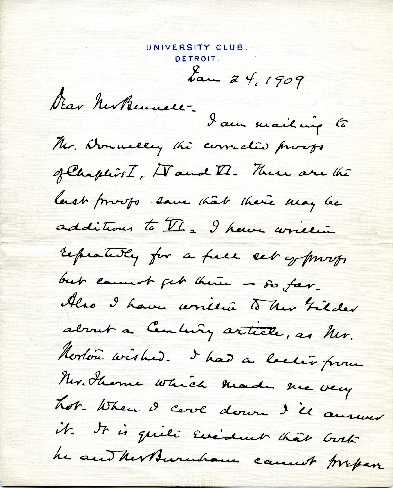 I am mailing to Mr. Donnelley the corrected proofs of Chapters I, IV, and VI. These are the last proofs save that there may be additions to VI. I have written repeatedly for a full set of proofs but cannot get them—so far. Also I have written to Mr. Gilder about a Century article, as Mr. Norton wished. I had a letter from Mr. Thorne which made me very hot. When I come down I’ll answer it. It is quite evident that both he and Mr. Burnham cannot prepare the plans and explanations. However, I shall remember that “a soft answer [unknown] away wrath, but grievous words stir up anger”; and for Mr. Burnham’s sake will not get into a row.

I’m sorry not to be in Chicago [unknown] now, but I cannot and, moreover, it seems to me that to get out a book by committee can only result in disaster. Tomorrow I am beginning once more on Chapter VIII and will let you know progress. I do want those proofs. Sorry you were under the weather, but judge you are all right again now. 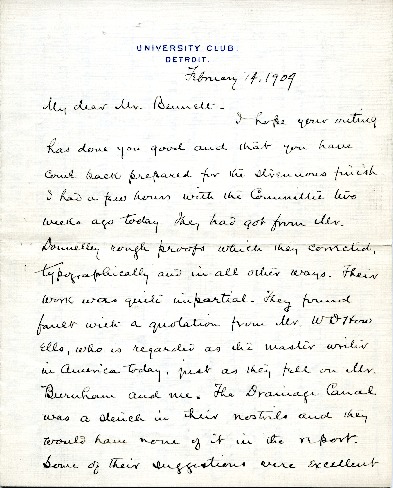 I hope your outing has done you good and that you have come back prepared for the strenuous finish. I had a few hours with the Committee two weeks ago today. They had got from Mr. Donnelley rough proofs which they corrected, typographically and in all other ways. Their work was quite impartial. They found favor with a quotation from Mr. W D Howells, who is regarded as the master writer in America today, just as they tell on Mr. Burnham and me. The Drainage Canal was a stench in their nostrils and they would have none of it in the report. Some of their suggestions were excellent. We had some arguments about the desirability of treating everything from a commercial standpoint, and when it was suggested that if they proposed to eliminate altogether the idea of beauty, they should destroy the better portion of the pictures they saw the point.

At the suggestion or request of Mr. Norton I got the Century to take an article for the June number. The editor suggests Mr. Hamlin Garland as the writer. I don’t know how that will strike the Committee, for I believe that he is a prophet without honor at home.

Now to report progress: I have sent back all the proofs of the chapters one to five inclusive, except Transportation, which is in the hands of the Committee for revision. Also I have sent proofs of the first half of Chapter VI—“Streets within the City.” I have sent copy for everything except the last chapter, and the final summing up of Chapter VII—The Heart of Chicago.

Now where is Mr. Burnham? When will he reach Chicago?

The proofs should have your very careful revision so far as streets etc. co as well as for everything else, and any suggestions you make looking to a closer tying the text to the illustrations will make for harmony and effectiveness. Of course Mr. Burnham will wish to go over the whole matter before it goes to press finally. I am much at sea about many things especially in the Heart of Chicago chapter. That will need very careful revision to make it express clearly Mr. Burnham’s and your views.